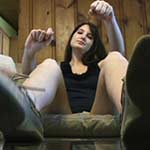 Paige wants to head to a swim party today but is having issues getting her Blazer started.  We started out seeing Paige sitting on the couch and pretending to crank the car.  She props her feet on the table and you get to watch as she pumps the imaginary gas pedal and begs her invisible car to start.  After she’s practiced enough, she gets in the Blazer and puts her skills to work.  The Blazer seems to be having an ignition problem as sometimes, turning the key doesn’t do anything.  She finally gives up.