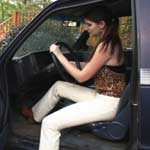 She’s walking to the old Chevy Blazer as she’s wrapping up her phone conversation with her mystery man.  He’s going to take her out tonight to her favorite place but she has to make it there first.  She’s wearing a sexy outfit…sleeveless top, super tight white leather pants and some cowgirl boots to round out her country roots.  She does a lot of talking to this car, some angry and some sweet, to get it to start for her.  She kills the first battery, replaces it and doesn’t get much luck from the second one.  Looks like date night might be a bust! 🙁