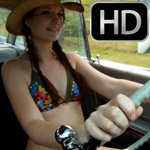 So we’re still driving along and it’s about time to turn around and head back.  Paige whips the long car up into a driveway, backs it up and stalls it out in the middle of the road.  Fortunately for her but unfortunately for us, the car starts right back up but it still gives her a scare.  As we’re heading back, I notice a big bruise on her inner thigh that looked like a bite mark.  Obviously I had to inquire about the ‘gettin freaky’ bruise! 🙂