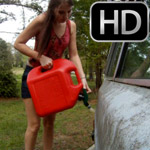 This is a funny video of an awesome girl who refuses to get out of character.  The Volvo is pretty much out of gas and Paige is going to start it, make a fuss about it being out of gas and then we’d roll into a scene where she’s adding gas to the tank.  The Volvo apparently wasn’t on the same page as us and right after she mentions it’s out of gas, the Volvo starts up.  Apparently me rolling the car down the hill before doing this video allowed whatever little bit of fuel was in the tank settle near the pick-up…oops!  She rolls with it (despite the ‘OMG!’ look on her face) and plays it off.  We add some gas to the tank so that she can move the car but since she’s not a smooth stick-shift driver (yet), she leaves a pair of ruts in my yard and you just have the see the look on her face!  This is one of those videos of when a played up scenario doesn’t go according to plan.  🙂

One thought on “Paige Erin Turner Cranking & Moving the Volvo”