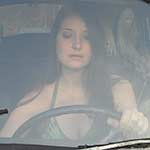 This 32+ minute clip consists of two cameras setup in the car while I’m filming with a third camera. She’s giving you a good show because she knows that’s what you like. She pumps the gas a little more than she should, getting it good and flooded before she struggles to unflood it and get it started. When she does get it running, she revs it up good and hard! But even with all that revving, the car still conks out when she lets the rpm’s get too low. This goes on for a while before I finally ask if she’s done. Instead of complying, she suggest that I get in the back seat to film a little more. Once situated, she turns the car off and stares at you while she pumps the gas pedal…yeah, she’s got that look! 😉