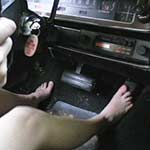 This is an almost 18 minute clip of Paige cranking, flooding, stalling and revving the old Dodge in some tan peep toe stiletto pumps at first but she kicks them off to go at it barefoot.  Lots of dialogue that only Paige can deliver! 🙂