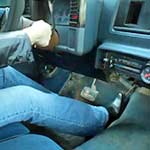 She’s cranking the Monte Carlo in the driveway wearing a leather jacket, jeans and black cowgirl boots. She cranks for a while before getting the car started and when she does, you can see some smoke come from the tailpipe . She romps on the pedal hard to clear it out at the end. Hopefully it’ll behave now.