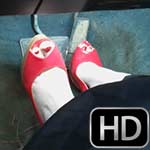 Scarlet Tries Getting the Monte Carlo Unstuck, 1 of 2

So Hana initially got the Monte Carlo stuck (video series yet to be posted) but you’ve been able to witness the severity of it by seeing Cassandra try to get it unstuck, but with no luck.  Scarlet had a previous attempt at it but her result was the same as Cassandra’s.  So, fast forward to a couple of weeks later.  The rain has stopped and the ground has dried a bit, so Scarlet gives it another go.

One thought on “Scarlet Tries Getting the Monte Carlo Unstuck, 1 of 2”