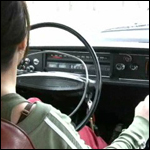 Tanyia & Xaria Head to School in the Volvo, 2 of 2

Xaria wants to take the Camaro to class, but Tanyia would rather take the Volvo because it’s raining.  Xaria knows the Volvo is temperamental, so she knows they’ll wind up being late for class if they take it.  Tanyia insists, gets in the Volvo.  After a short cranking spurt, it starts, and Xaria turns on the radio.  They goof off while Tanyia drives – until the Volvo dies.  It’s not long before they’re on their way again, but it looks like they might miss class today – especially when it dies a second time!

One thought on “Tanyia & Xaria Head to School in the Volvo, 2 of 2”