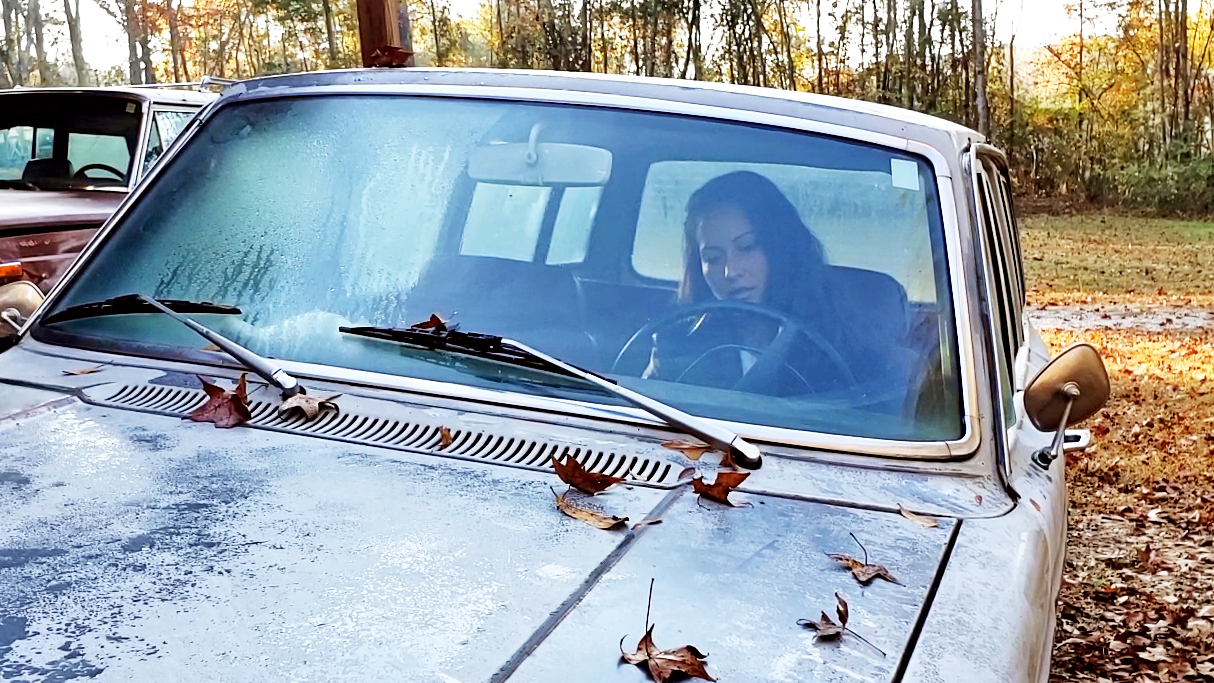 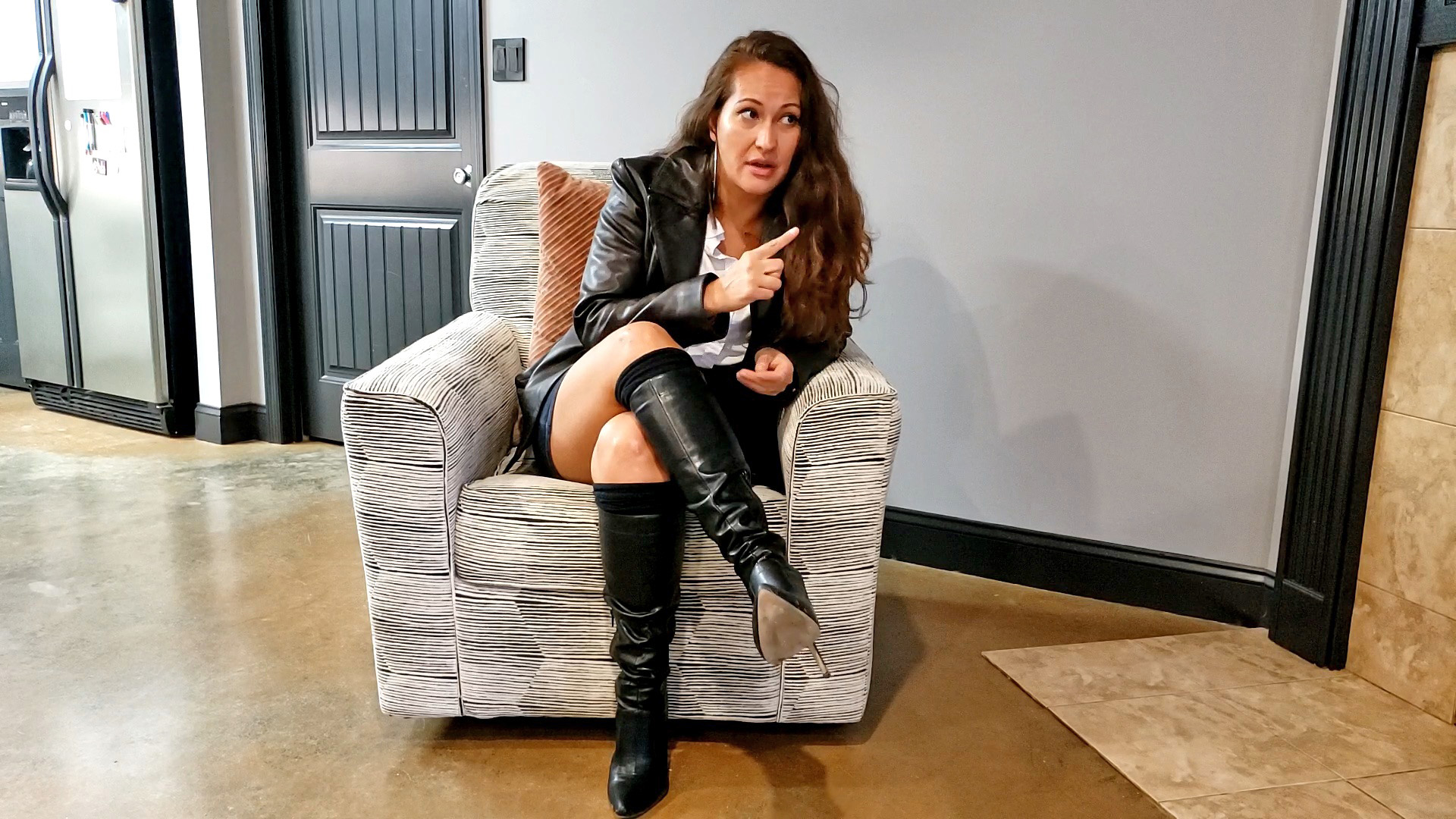 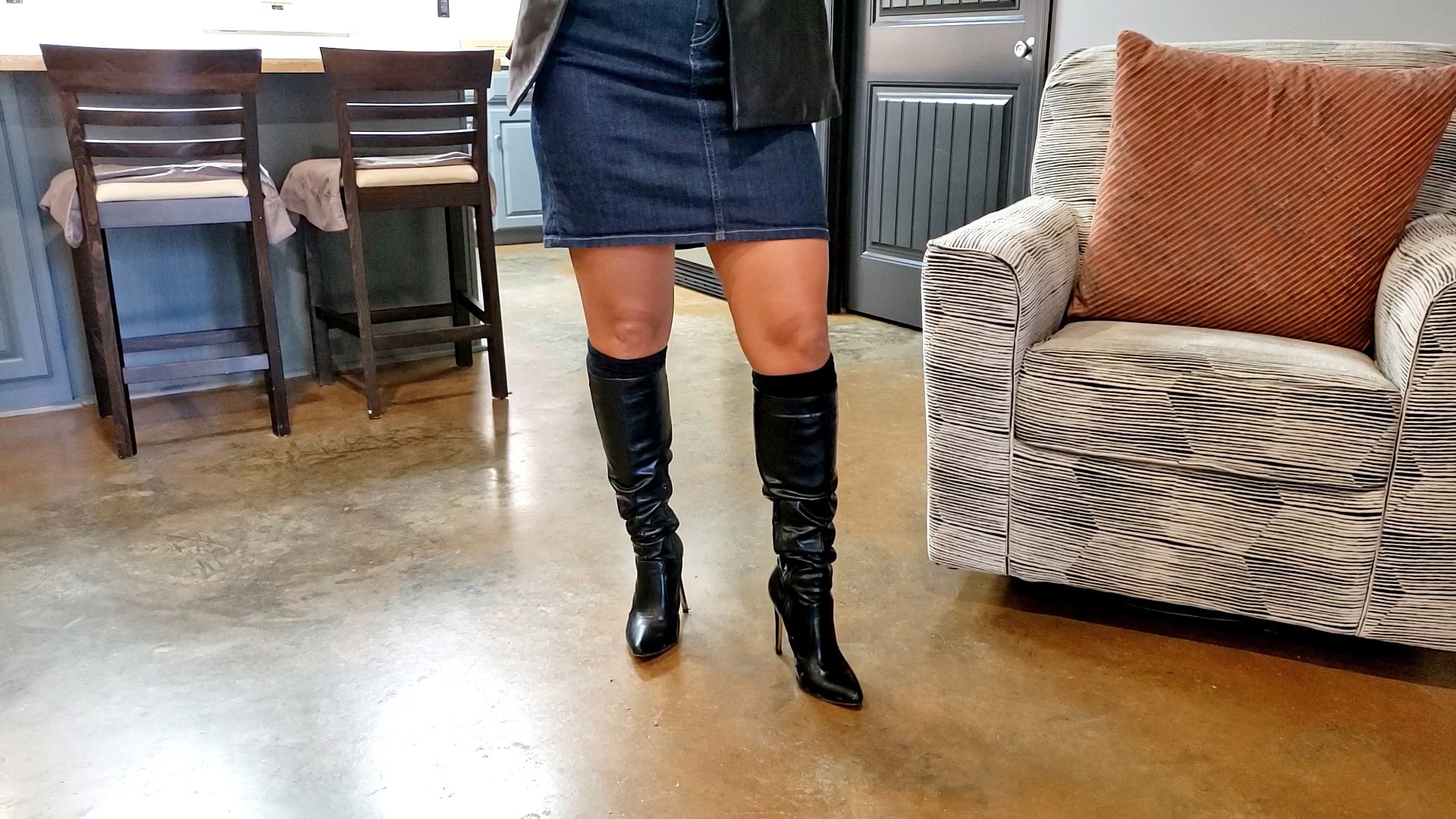 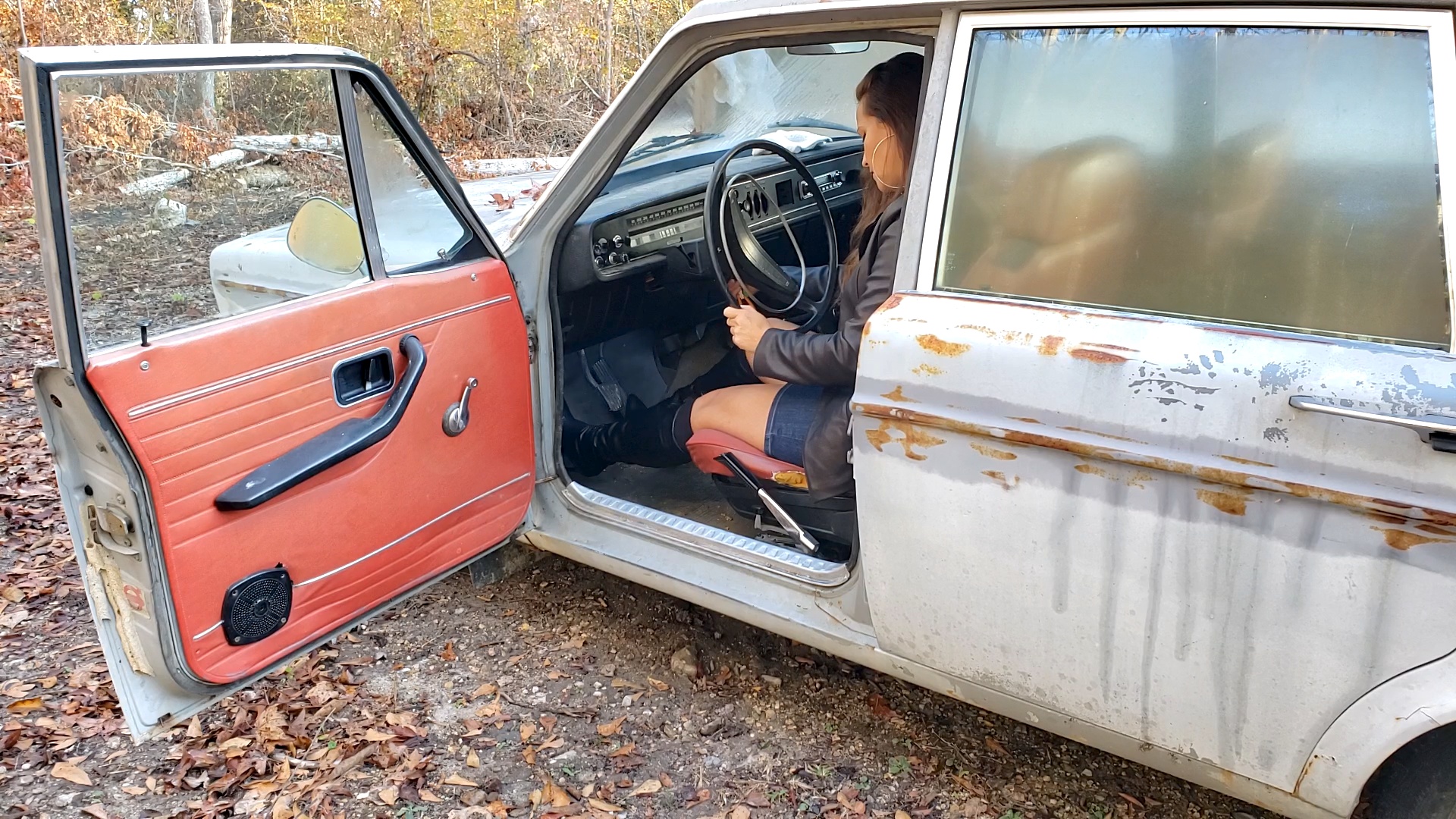 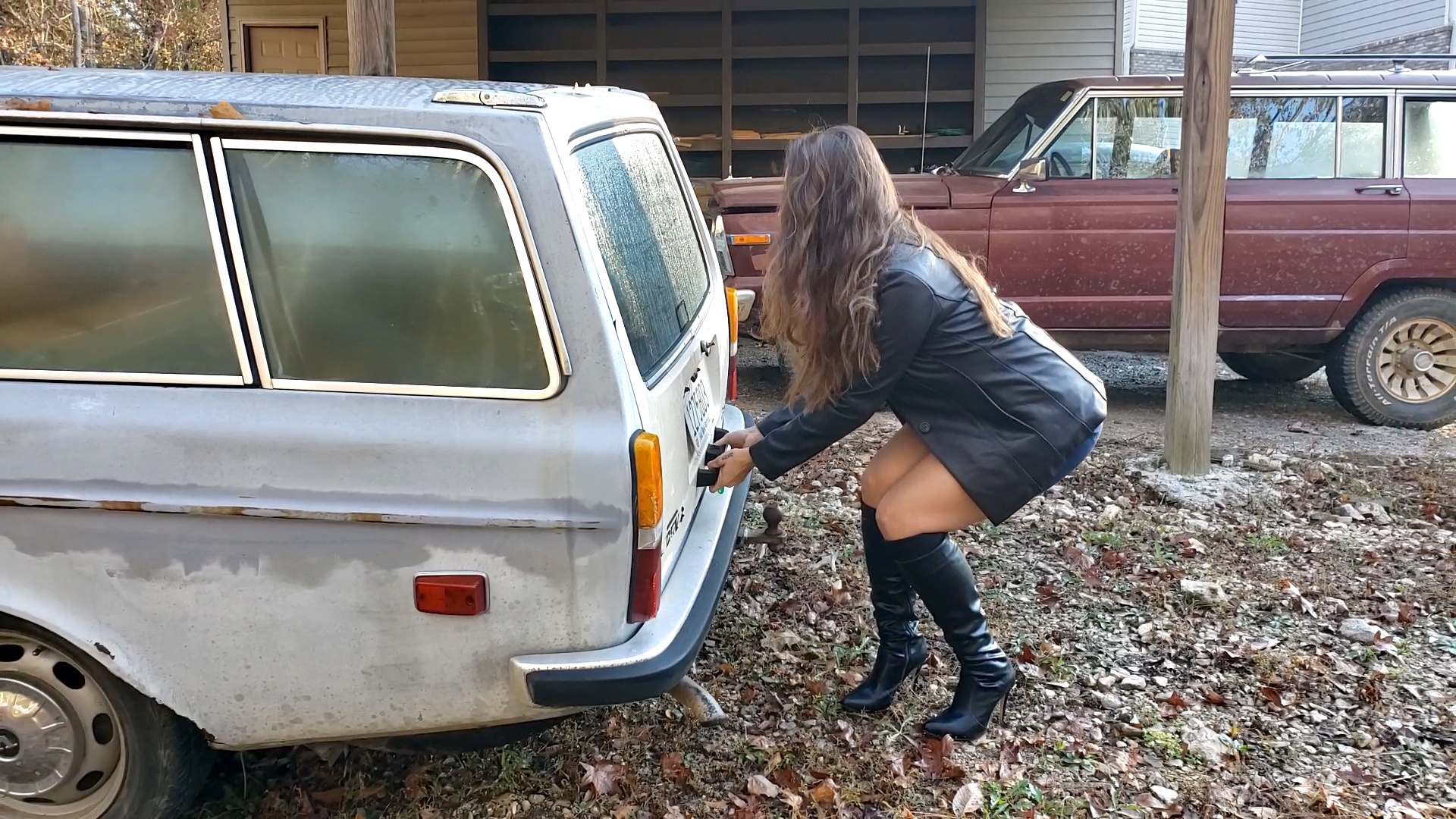 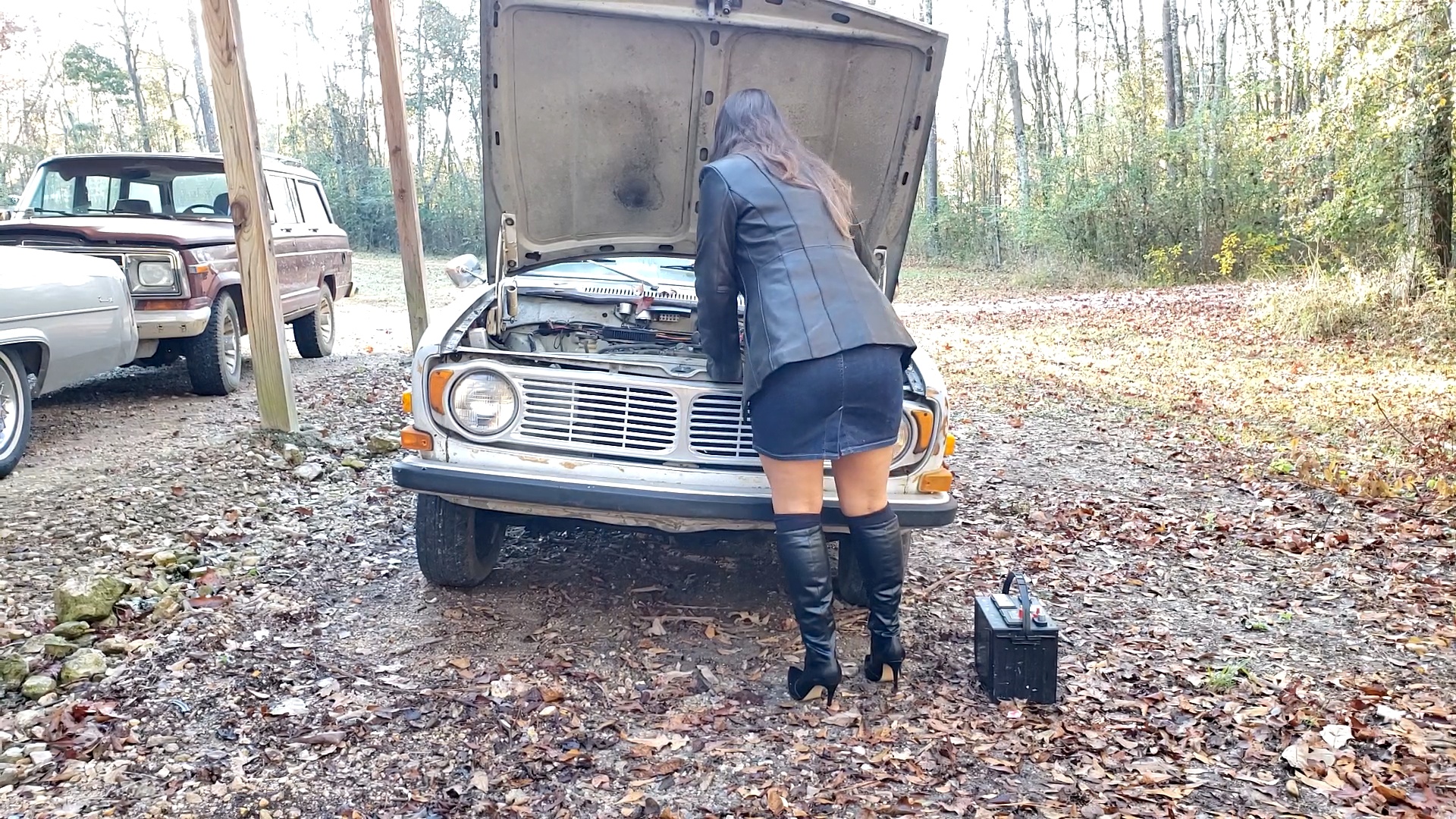 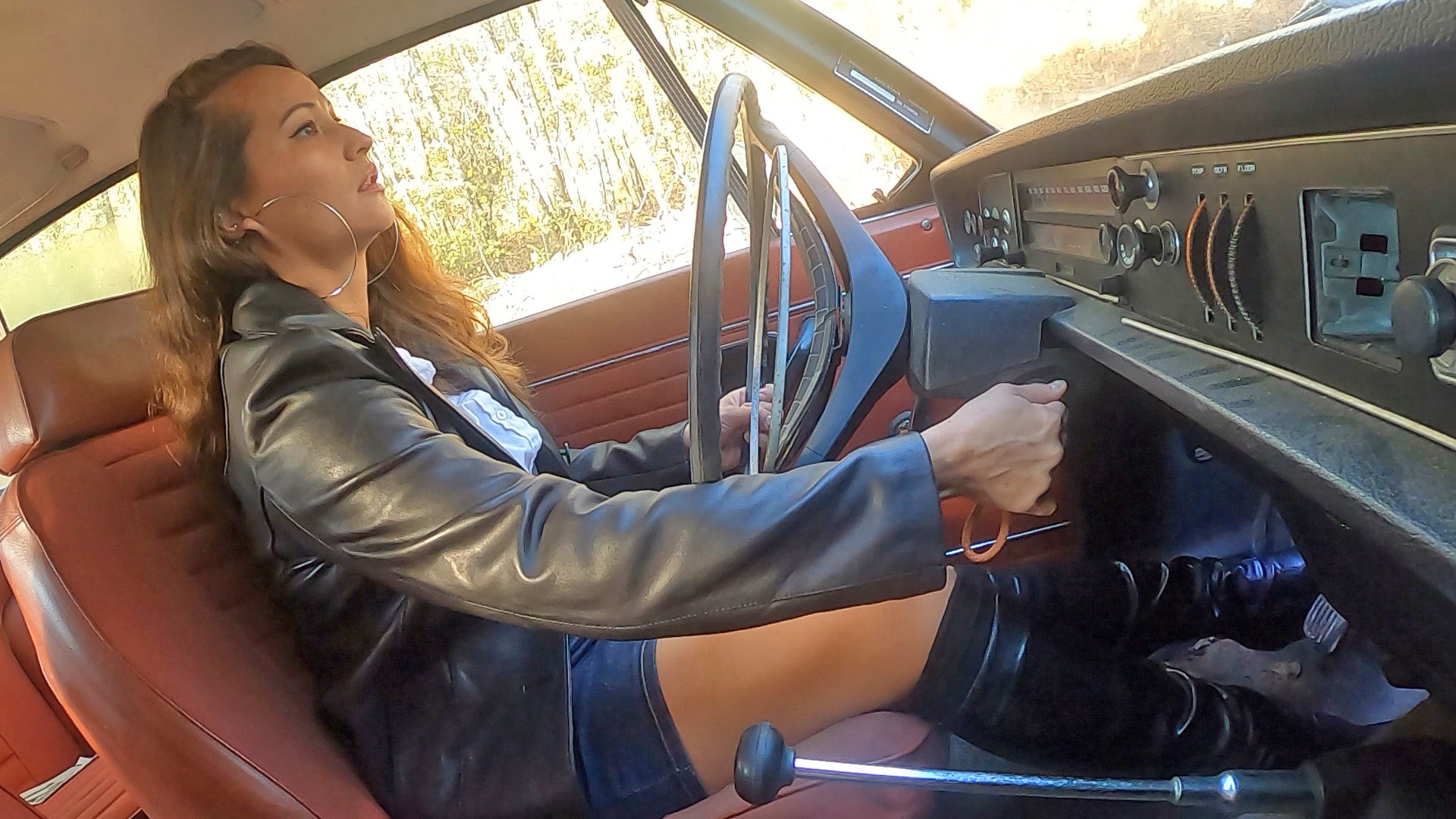 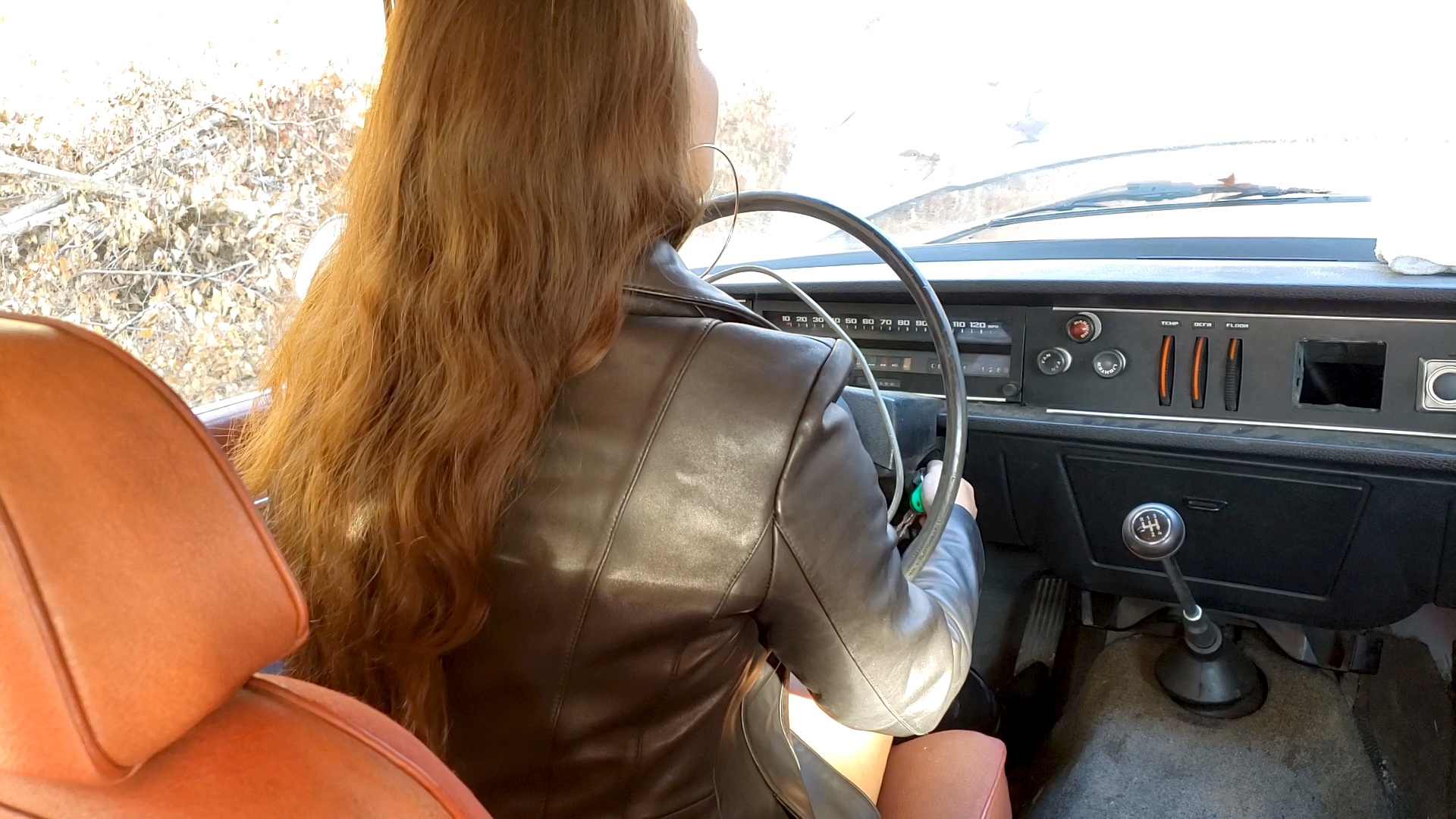 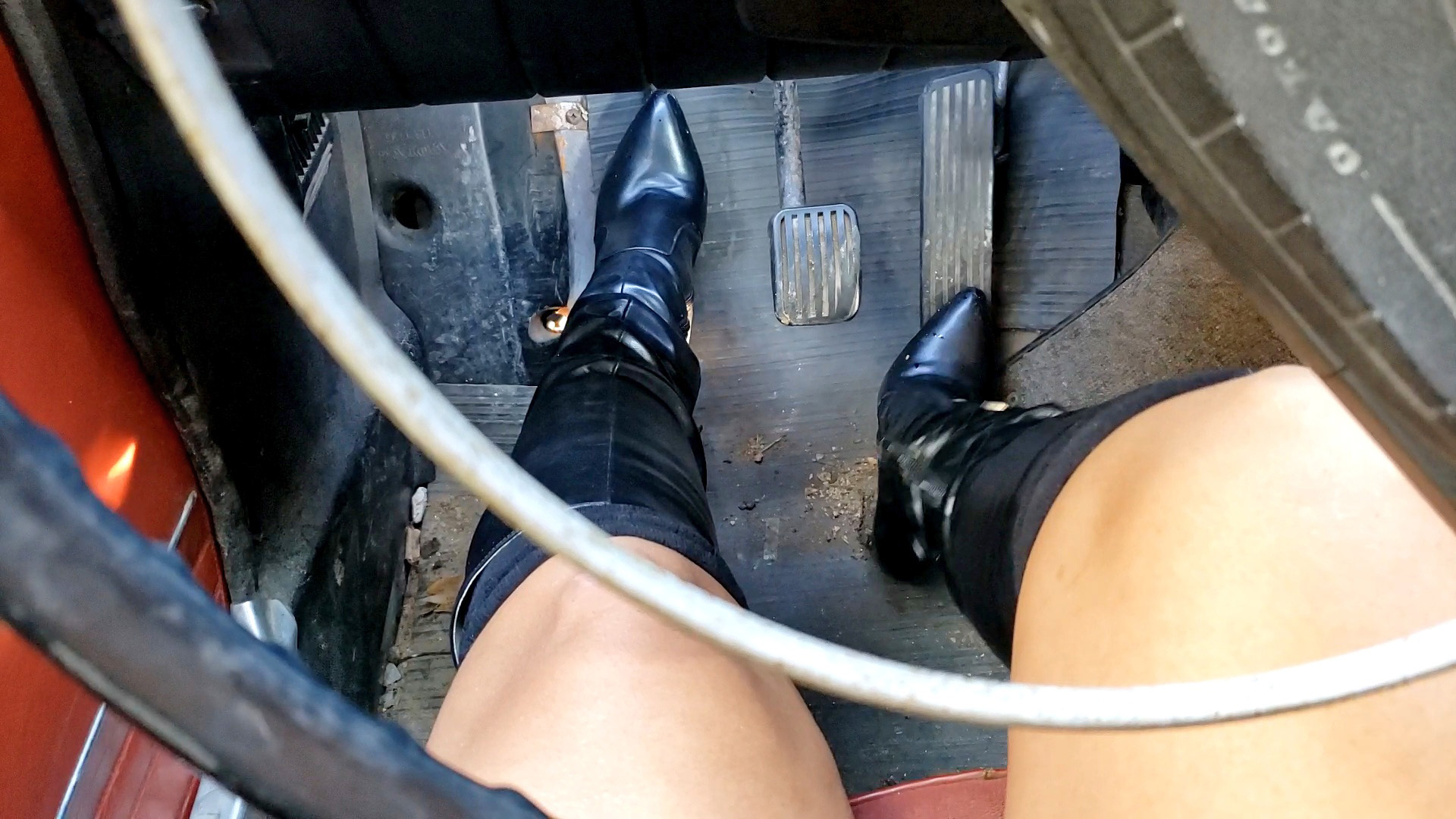 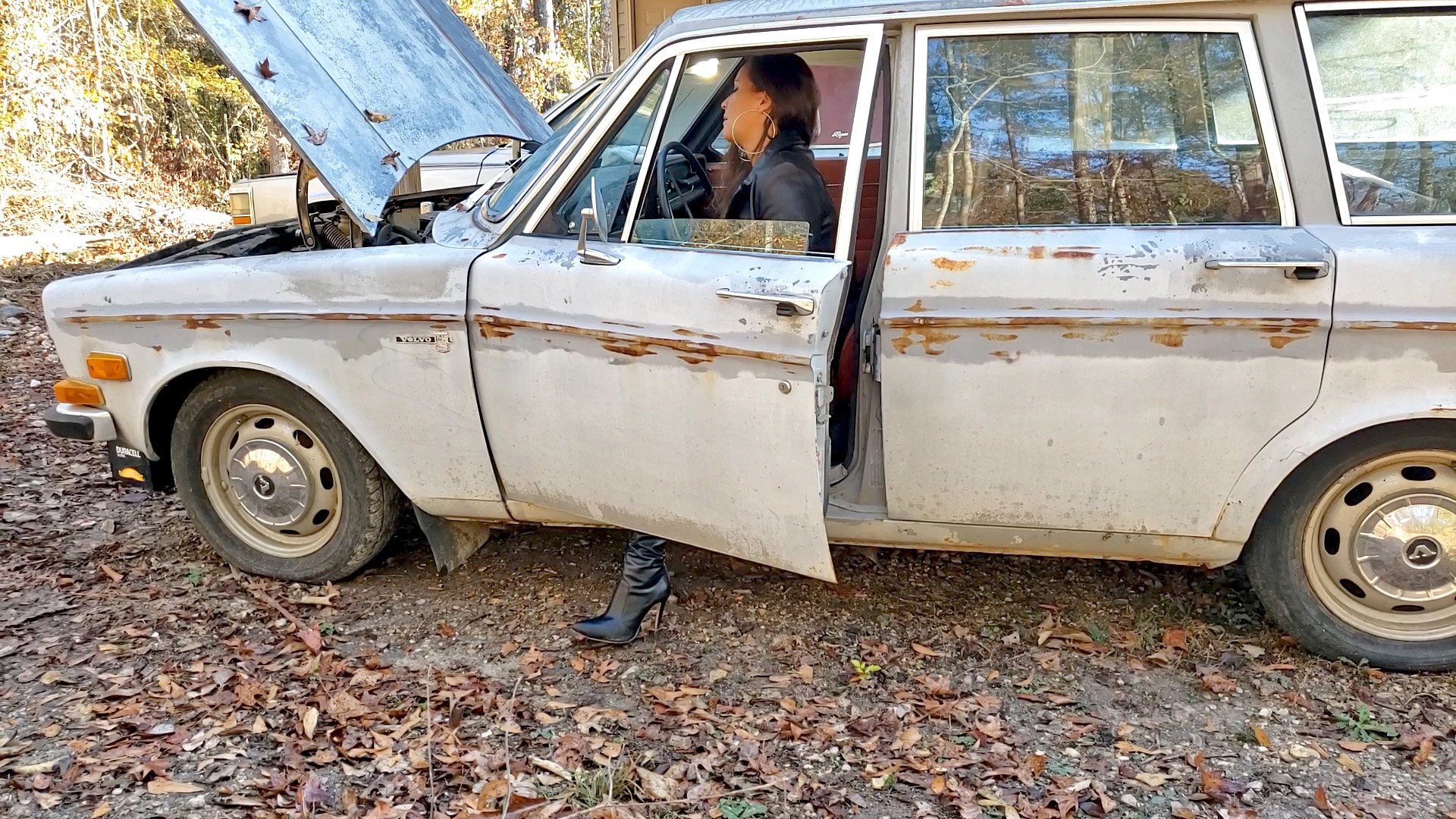 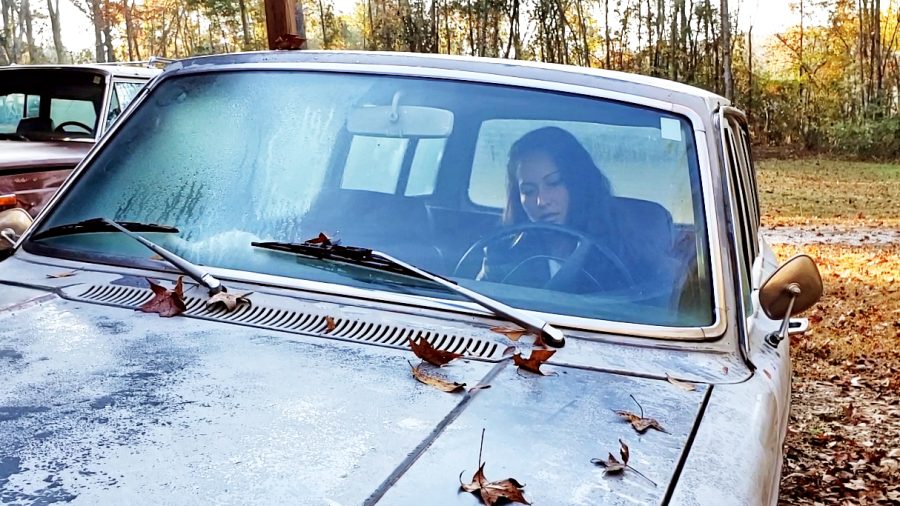 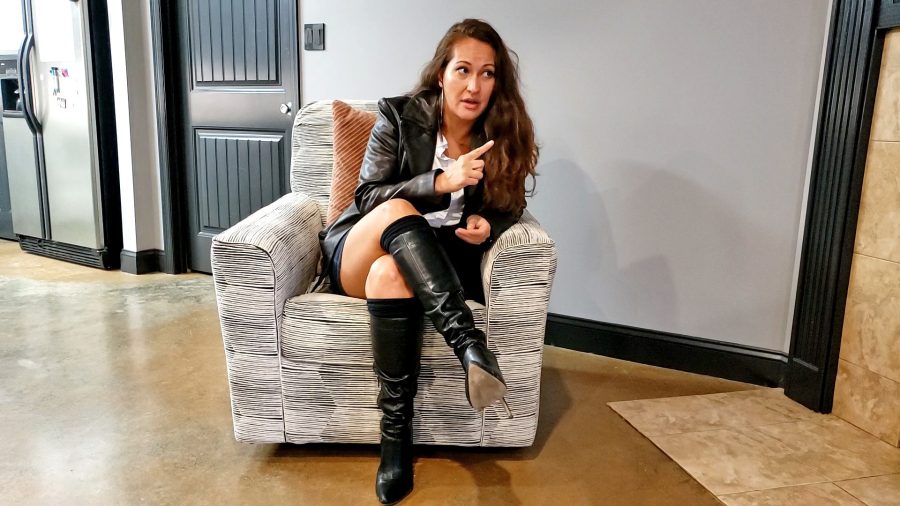 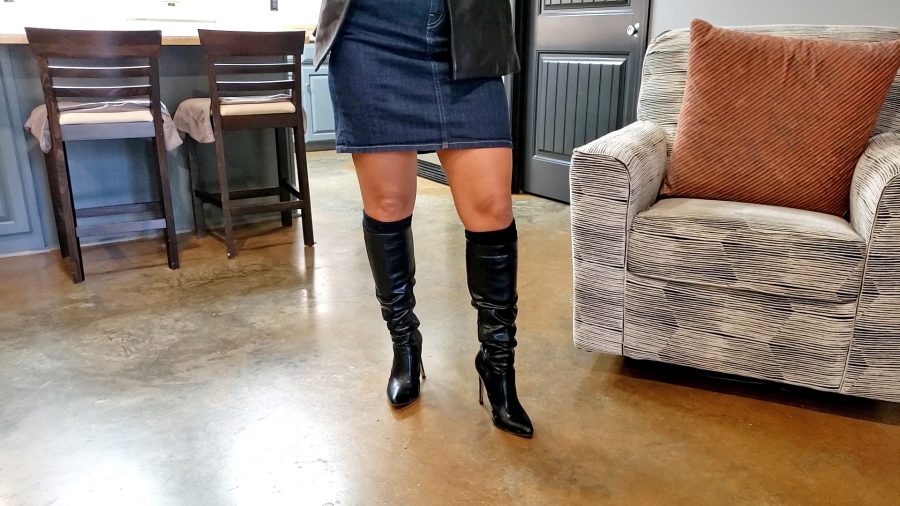 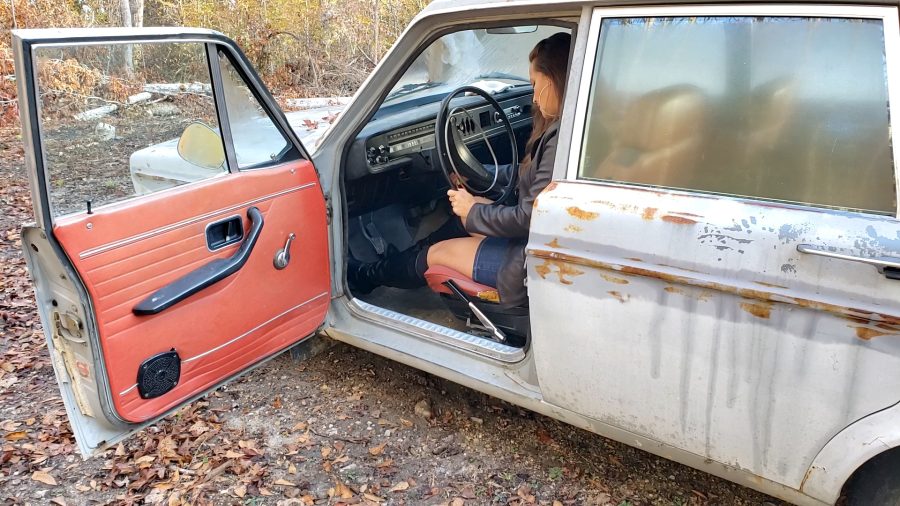 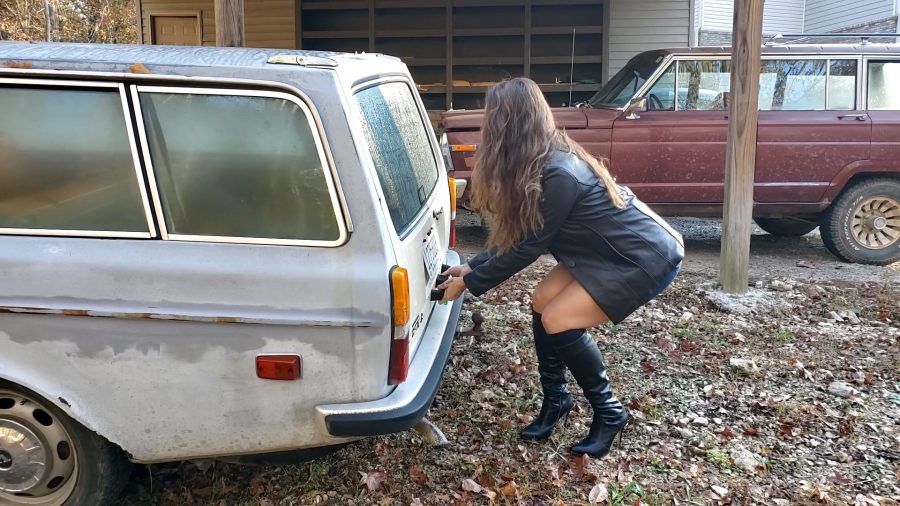 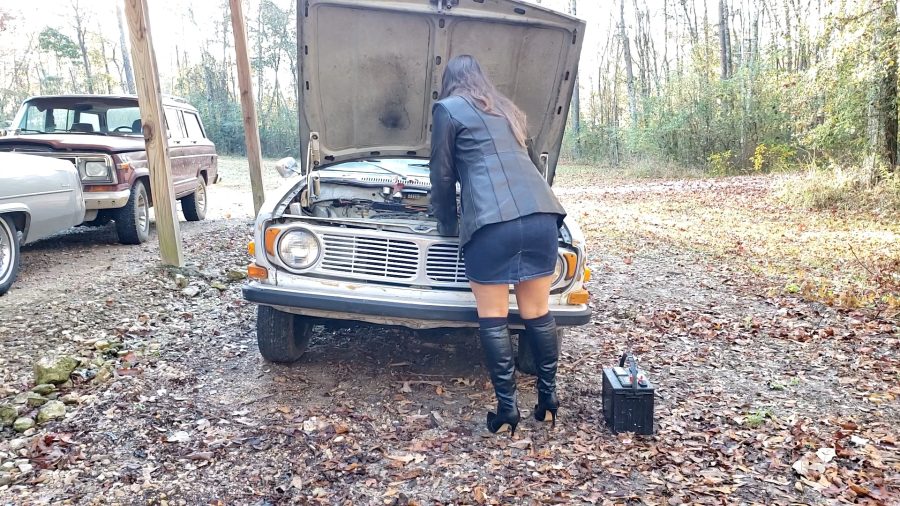 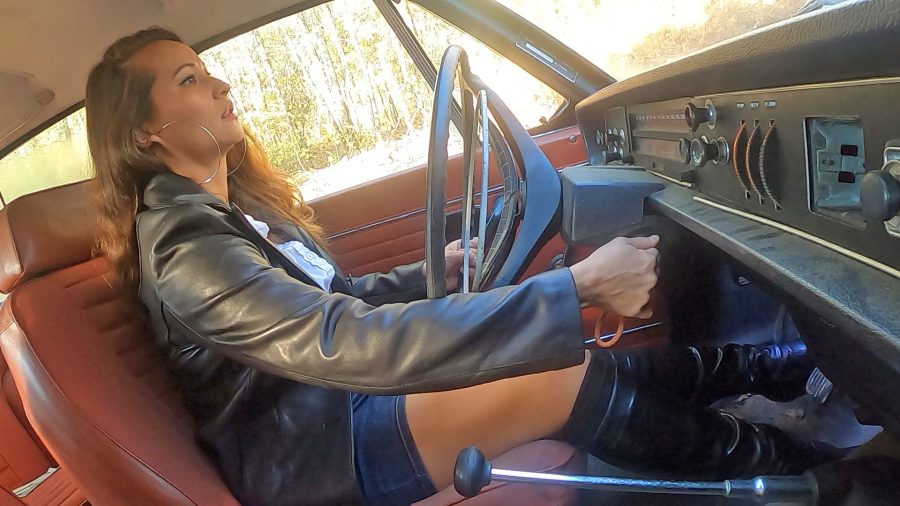 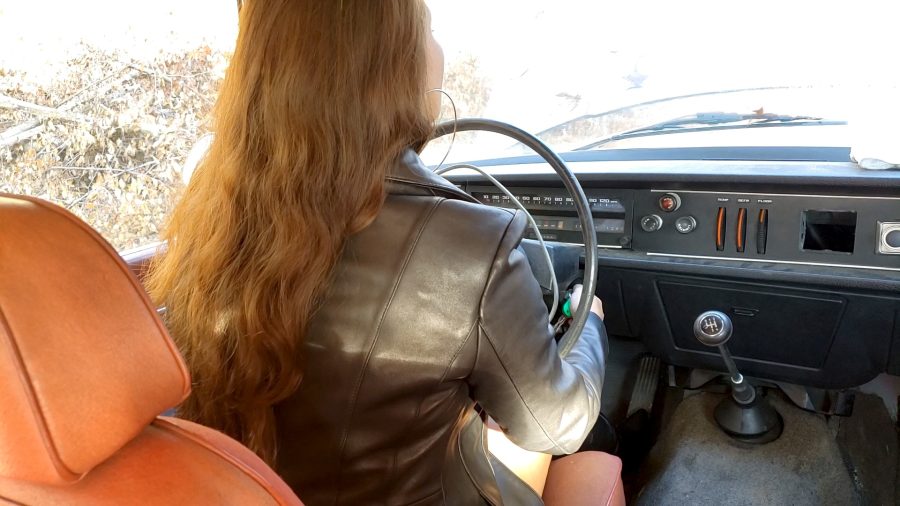 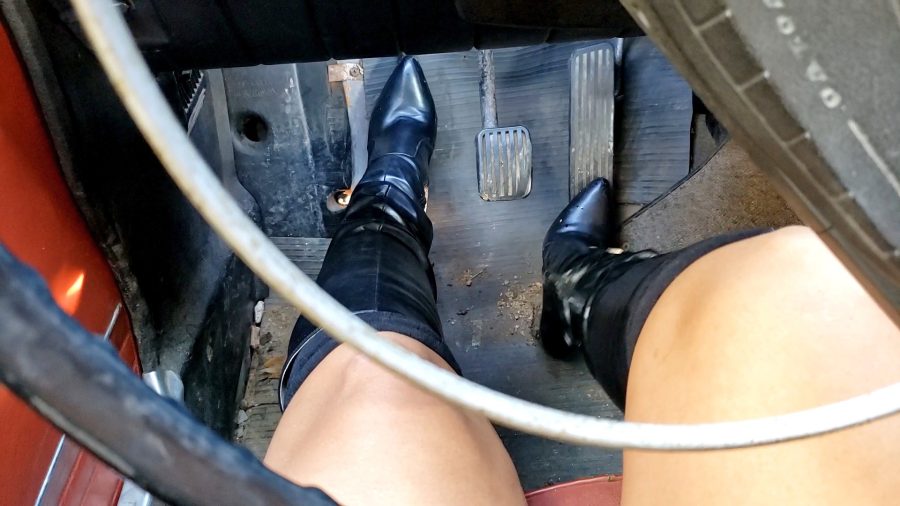 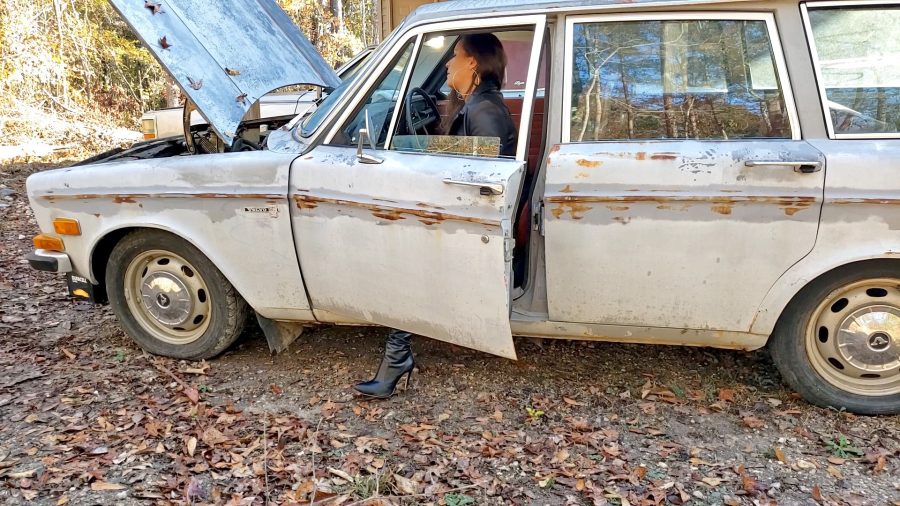 Jane has an appointment to take the car to the mechanic because of all the problems she has with it. The scene starts with Jane inside the house seating on a chair/coach. While seating, she has her legs crossed, then pumps her foot up and down as if she was pumping a gas pedal. At the same time, she is telling Billy that she needs to take the car to the mechanic but will be right back in half an hour. She gets up, grabs the keys, and exits the house. Then, the camera pauses/vanishes for some seconds.

The camera resumes but this time filming Jane cranking the car from the windshield view. The car already has a weak battery. Jane is already inside the car when the camera resumes. She is cranking the car with a weak battery. While she cranks, she is moving her body back and forth in the seat. She is basically leaning forward until her chest is almost touching the steering wheel and then returns to normal position. She keeps doing that movement multiple times while cranking. Then, she stops cranking, pumps the gas a few times, and cranks again but the battery is very weak.

The video pauses again and now the camera is back in the house.

Pretending some minutes have passed. Billy (Camera) is still inside the house looking at the house entrance door from a few meters away. Then, Jane opens the door and walks in with a tired look on her face and complains “the car won’t start again”. Jane grabs a phone and calls the mechanic. She tells him that the battery keeps getting weaker. She also tells him that she pumped the gas many times. When the call finishes, she exits the house to keep trying to start the car. While she was calling the mechanic and walking around the house near the exit, Billy was looking at her legs and boots.

Jane is inside the car already. As soon as Billy leaves the house, he can see the car struggling to start with a weak battery. He starts walking towards the car until we can see the driver’s door open. We can also see Jane’s left leg shaking/moving every time she cranks. The view should be a little bit far from the driver’s door where we can see part of her leg. The battery is very weak.

Jane exits the car and sees Billy. She tells him that he can come with her to the mechanic, but she needs to replace the battery first. She opens the trunk, grabs a battery, and replaces the battery. She leaves the trunk of the car open. However, she did not know that the replacement battery had problems too. While she replaces the battery, we can see her full body from behind.

When she finishes replacing the battery, she goes back inside the bus and closes the driver’s door.

Now, the camera needs to be inside the car at the front pointing to the driver’s view. She keeps cranking. The battery is weaker. She pumps and tries multiple times. After a few moments, she starts bouncing a little, like a sexy bouncing, and says “C’mon baby c’mon, let’s go, c’mon start” but the car won’t start. She moves the gear shift between cranking attempts.

Billy is in the back seat. She is looking at Jane pumping the pedal gas. Jane keeps cranking and cranking but the car just won’t start. She pumps multiple times. At some point, she says” C’mon you should have some juice left, please start”. She cranks and cranks, but nothing is working. She is also leaning her body forward while cranking the car.

Jane keeps cranking the car. The new battery is getting weaker and weaker. After some time, she tells Billy that he can go back to the house if he wants and, she asks him to close the trunk on his way back. It looks that this will take a while. The camera should be filming her boots and legs only from different angles while she is pressing the gas pedal and cranking, and while she is talking to Billy.

While Jane keeps cranking the car, Billy (camera) exits the car and goes behind the trunk. He can see Jane cranking and bouncing a little bit through the trunk of the car.

Then, Billy moves to the right side to watch Jane from a different angle. While Jane hugs the steering wheel and moves the seat closer as if she needed to reach the pedals, her leg is now outside, and we can see part of her boot. Then, she starts bouncing and cranking while Billy is watching. The driver’s door is a little bit open too.